Ever since I ran my first road half-marathon race, I wanted to try to do a long trail race. For the next year I have already signed up for a 25K and really want to try to do a 50K at the end of 2015 running season, but for 2014 I didn’t expect to do any more races because the season is over in Canada and I was not considering traveling somewhere for a race.

So, I was not even thinking about any races in the last few months of 2014, but then one of the guys in Salomon Toronto running group mentioned that he is doing a 50M in San Francisco – The North Face Endurance Challenge California. After asking around I’ve realized, that there will be more than one person from our running group doing various distances there. Long story short, thanks to my wife’s and to my employer‘s support I have managed to get an opportunity to do a half-marathon trail race in San Francisco on December 7, 2014.

What Have I Done?!

After signing up for the race and booking the trip to San Francisco, I have started thinking about it and the more I thought about it, the scarier the race looked. I have never ran a race with such an intimidating elevation profile:

Even during our hardest weekly runs and my own training long runs, I have never amounted to more than a hundred meters (~300 feet) of elevation gain, while this race has 3.5 hills each of which have ~600-800 feet of elevation gain.

To not let the panic discourage me, I have deduced to do what I can to prepare and get myself as ready for the race as possible in the next 1.5 months.

In preparation for the race considering that the elevation profile seemed like the most intimidating part of it, I have started focusing on uphill walking and jogging (I’m not at a point with my fitness where I could actually run uphill for any significant period of time). Aside from religiously following runners-specific strength training routines from Jason Fitzgerald I have started doing two things (in addition to the usual trail runs):

Stairs climbing. I live in a 25-story condo and I have just started running/walking up 25 floors, then riding the elevator down and repeating that until I couldn’t do it anymore (first few times) or until I reached the total elevation profile for the upcoming race (210 stories).

This was probably the most important part of the training, simply because up until the second or third day of doing it I didn’t actually know how to properly walk/run uphill. I would use my quads to pull myself up, trash them in the first 10-20 minutes and then couldn’t even walk straight, running downhill afterward would be out of the question. During one of the exercises I’ve noticed, that if I try to use my hamstrings, calves and, especially, glutes to push myself up, I spend much less energy to get myself up the stairs and my average heart rate gets significantly lower. That’s when I started developing some uphill running technique, which has proven very effective on my trail runs.

High-Grade Uphill Running. Since I could not find a way to reproduce the race’s long 11-13% grade hills anywhere in Toronto, I have decided to just try the treadmill. And, to my surprise, it worked really well. Since I could specifically set the grade on my treadmill, I have successfully reproduced all of the uphills of the upcoming race within my long training runs and it has given me confidence that I could actually change my primary goal from “just finish under the 4hrs cutoff time and don’t die” to a more ambitious (for me) “finish under 3 hours”.

My First Meeting With The Hills

A few of my friends from Toronto were running 50M, 50K and Marathon distances on Saturday (Dec 6) and I really wanted to support them by being meeting them at the finish line. And, of course, I wanted to check out at least a part of the course before running it the next day. So, I took a taxi to the start/finish area of the race.

“Holy shit!” – that was my first thought after my taxi crossed the Golden Gate bridge, we went through a tunnel and into the Marin Headlands. Only then I have realized how a 900 feet hill looks like (being from a flat country and living in a flat part of Canada for the last 8 years I haven’t actually encountered any large hills or just never tried to match them to elevation numbers). And a few minutes later I have noticed tiny dots moving across a side of one of the hills… those were 50M/50k runners. The sight has got me worried, but then I realized, that there is no way back out of it and I’ll just have to do my best – I trained by the numbers and I should be ready for this race.

While being at the finish line I have witnessed glorious finishes by Sage Canaday (50M winner) and other elites and then, sometime later I have met my good friend Deanne McDoom, who just finished her first 50K trail race. It was a huge inspiration seeing a person you know finish such a serious race. Unfortunately, from being on my feet for a few days I have started feeling some suspicious aches and pains in my left foot, so I have decided to leave early and could not meet the friends from Toronto, who were still running their long races.

When I woke up at 4:30 am (just could not sleep, being excited/worried about the race), I have noticed, that the pain in the arch of my left foot was still there. That got me very worried, but again – there was nothing I could do, so I just went on with my preparations and by 8 am I was standing at the starting line waiting for my wave to begin the race. We have started at 8:10 am. 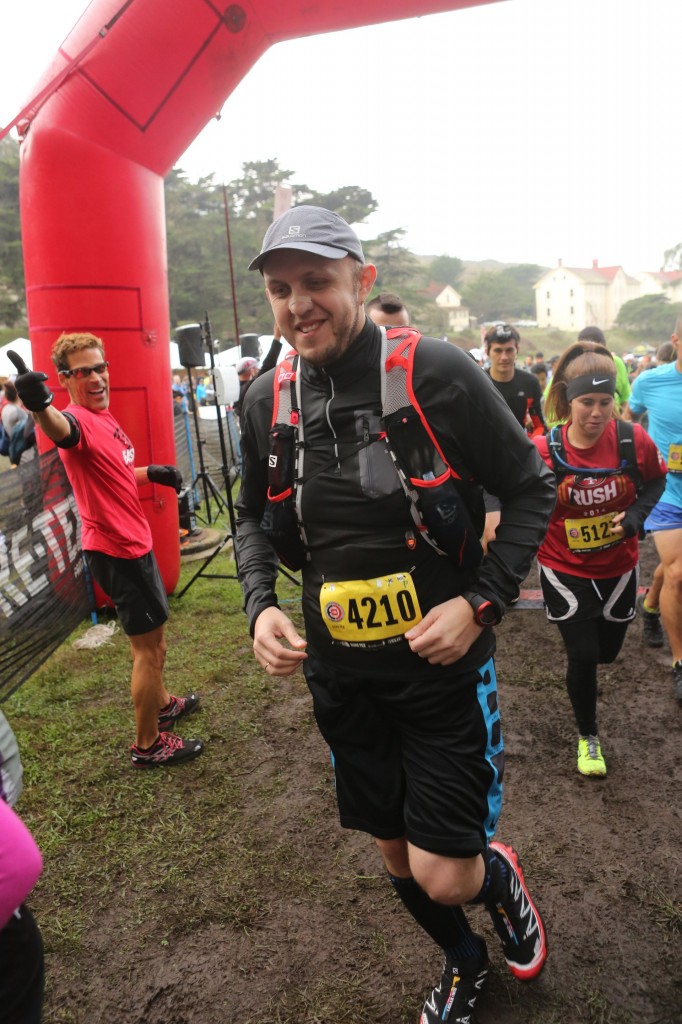 The first mile I was warming up, keeping my pace steady and my heart rate reasonable.

And then we hit the first hill. Surprising myself, I have managed to run/walk it pretty quickly (constantly monitoring my heart rate to make sure I would not burn too much energy so early in the race) and didn’t feel much pain/tiredness by the time we have got to the top of the first of the 3.5 hills in the race (around 30 minutes into the race). The first downhill was a blast, that was my fastest mile ever. 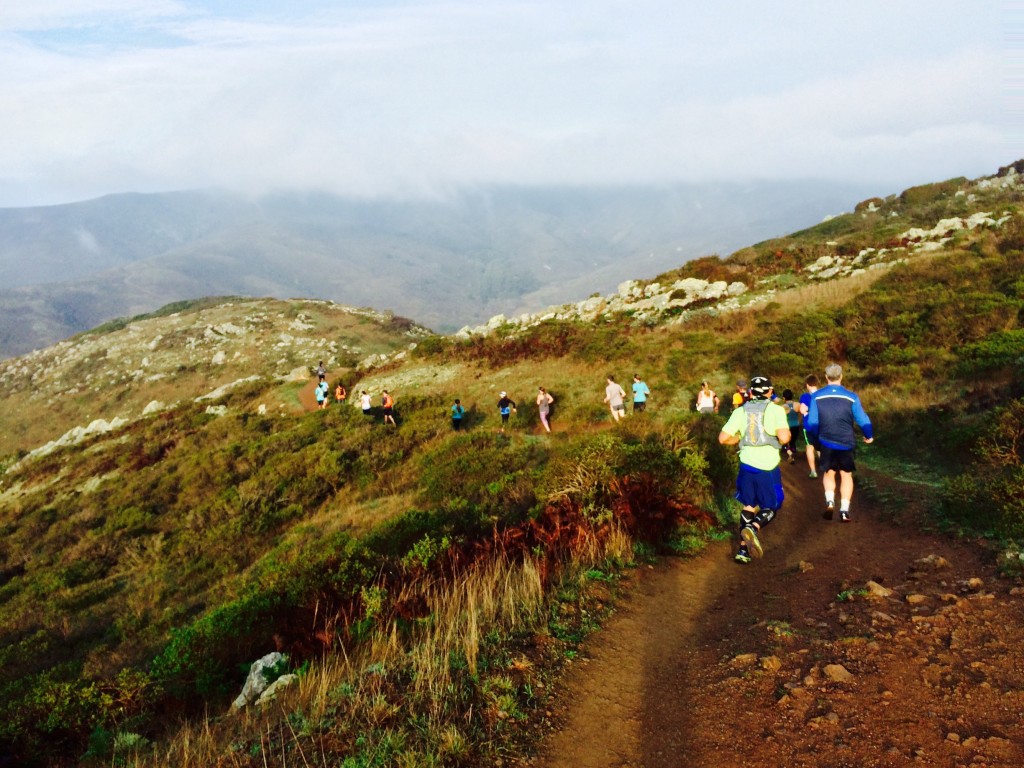 The second hill (at around 1hr into the race) was a bit harder and by the time we have got to the top of it (1:23), I have started feeling tired and my feet started to swell. And that is when my major mistake started to creep in on me: I bought my shoes a few months ago and during the last 1.5 months my feet got bigger (both longer and a bit wider). I attribute it to feet conditioning because of all the running I did in the last 4 months. Anyways, the shoes I was racing in fit pretty well for the first half of the race, but when my feet started to swell (a normal process for long runs as far as I understand) the shoes got a little close to being tight. And then I started my second long and fast descent. About 30% down I have noticed that my toes were constantly hitting the front of the shoes, about 70% down I had to stop and switch to walk/run because of the pain in my toes. I have finished the descent (around 1:35) about 30% slower than the previous one.

Lesson #1: Make sure your shoes are roomy enough to accommodate for swelled up feet during a race. Or you will lose your toenails.

The last hill climb was almost all fast walking (maybe ~10-15% running on flats and low inclines), but not because of my legs being tired, but because the pain in my left foot started to feel much worse and I was afraid that me pushing too hard up the hill may aggravate it even more and I was already past the middle of the course, so dropping out now would feel too embarrassing. And I knew that after the last large hill and a small peak at the end, there will be a 3 km downhill which I could use to gain some time. To help with the pain I started listening to music, focusing on breathing and the beat and blocking out the pain in the foot.

Lesson #2: Spend the last few days before the race off your feet (especially if you are not used to walking a lot).

Just as on my training runs, music helped a lot and by the time I have got to the top of the last hill (2:20) I felt energized again and ignoring the pain in my toes went downhill hoping to finish at around 2:40 (making it just a 15 minutes slower half-marathon result compared to my flat road half-marathon PR).

Unfortunately, after a few minutes of running I have noticed, that my core muscles (abs, muscles between the ribs) started cramping and at some point, I had to stop again and switch to a lower pace with walking breaks to keep the pain tolerable. I’m still not sure what happened there: either my core muscles just got tired from all the downhill running (I tend to tense a lot in my upper body when I’m going downhill fast) or maybe it was some kind of electrolyte imbalance issue, but it surely kept me from gaining time on the last downhill as I was planning to do.

About 15 minutes before the end of the race it was the time to take my next (last) gel, but being focused on the core muscles pain and yet feeling energized I have made another mistake (pretty common one as I found out later while talking to my friends): I have decided to skip the food and just push it towards the finish line. 10 minutes later I’ve hit The Wall for the first time in my life. I have suddenly started feeling twice as heavy, I could not get my heart rate down even by switching to walking, I did not have any power left to run.

Lesson #3: Stick to your feeding schedule during a run, even if it means taking your last food minutes to the finish line!

The last 5-10 minutes of the race felt like the longest run of my life. If not for the watch, I would easily believe it took me about 30-45 minutes to reach the finish line. Being so shocked by the feeling I didn’t even consider taking a gel at that point, though now I realize it most probably would have helped a lot.

Because of a slower descent and the bonk at the end, I have reached the finish line a bit later, yet still ahead of my 3-hour goal: my official finishing time is 2:51:23 and I’m still very proud of it! 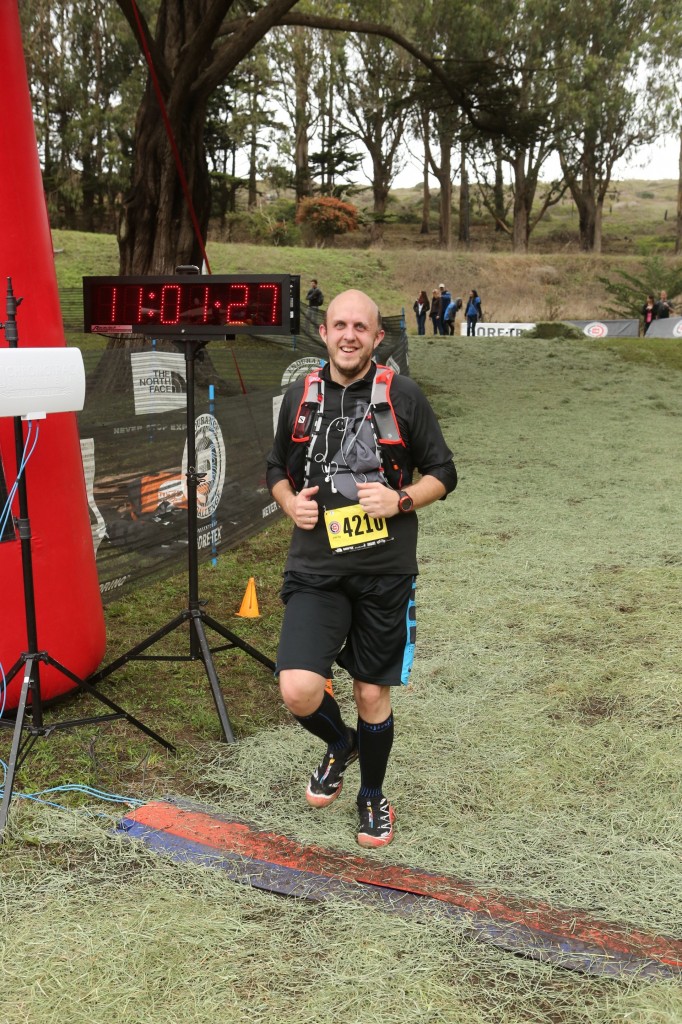 I would like to thank my lovely wife for her constant support and my friends from Salomon Toronto running group for believing in me and constantly inspiring me to push my limits further than I have ever expected I could.

Special thanks to Endurance Tap guys who provided me with a batch of their delicious and very effective maple syrup based running gels which I used exclusively throughout the race and absolutely loved every single one of them (I actually had to hold myself back from taking another one until it was time, they are that delicious). I strongly support their campaign for bringing this product to market and hope they will reach their goal.

And, finally, I really hope the next year will bring even more experiences like this and I will keep surprising myself over and over again! 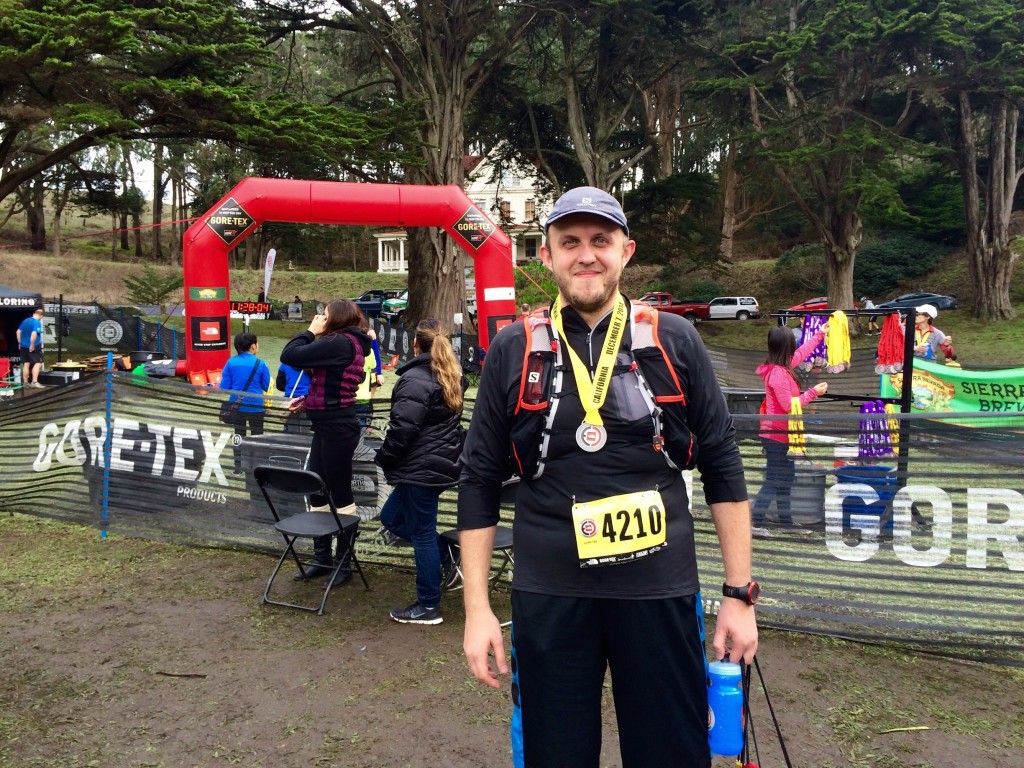