My name is Oleksiy and I am a Technical/Web Operations Engineer or just an “ops”. If described in a few words, our job is to make sure your favorite web sites are up and running 24×7, you can post a photo of your funny cat to Facebook at 2 am or follow your favorite celebrity on Twitter any time of the day. We literally are the operators of the web. As you can imagine, being on-call 24×7 (we have weekly rotation, but as a Head of Technical Operations I am always a level 2 on-call person) could be pretty stressful and I actually believe, that one of the pre-requisites for a successful career in technical operations is the ability to cope with this stress and still stay productive over time.

I have never been a “sports person”. Being a geek in school, I despised all physical education and sports activities. Now I realize that it was probably because no one told me that I could get better in sports if I was actually training and not suffering through it once or twice a week for half an hour. Anyways, sports “wasn’t for me”, I thought.

Another interesting fact about me is that I really love food (both, cooking and eating). I actually wanted to become a professional chef until I was about 12 or 14 and got introduced to computers. But even though I didn’t make a career in cooking, I still like to cook sometimes for my family and my love for eating great food just became stronger over the years as I got a chance to try more different cuisines and got access to fancier foods.

So, as you can see, I have got all the classical pre-requisites for being overweight: high-stress sedentary job, no physical activity, and a love for tasty (which, for me, was always an opposite of healthy) food. No surprise, that I slowly, but surely have been gaining weight since my college years (when I got married and had to start eating regularly) up until I have looked at my 29 years old self and noticed, that my weight just crossed the 275 lb (125 kg) mark.

Here is me at the peak of my weight: 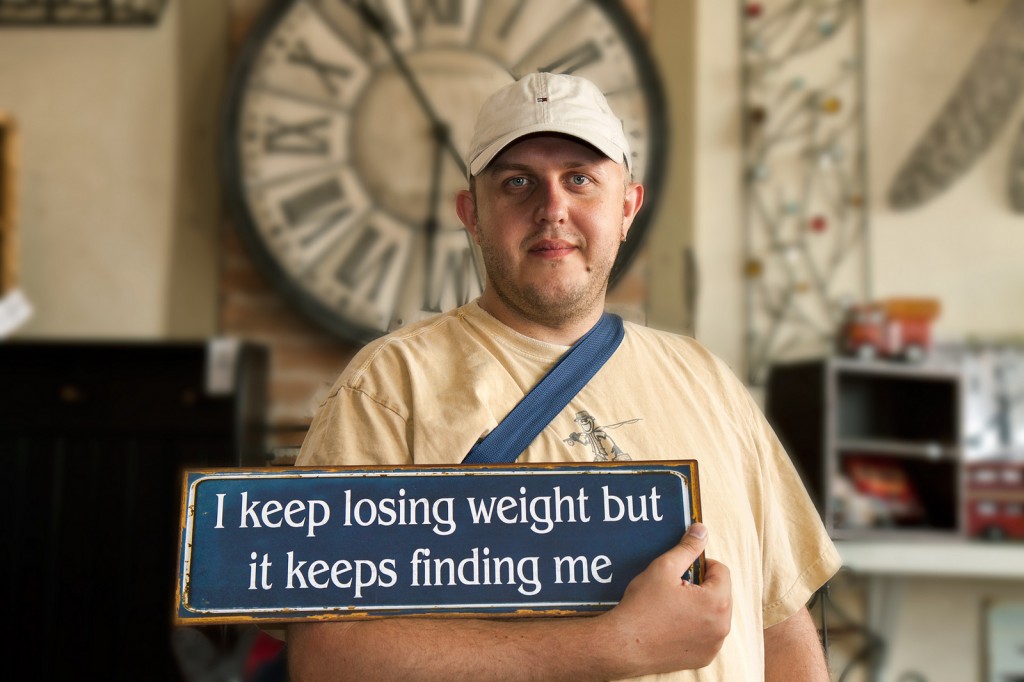 One of the triggers for my decision to start doing something about my weight was an example of one of my co-workers, who started following a so called “slow-carb diet” and it actually produced some meaningful results. Surprisingly, I have never encountered a single person who has actually lost any reasonable amount of weight by following any diets. So, I have decided to take a look at the book by Tim Ferriss called The 4-Hour Body: An Uncommon Guide to Rapid Fat-Loss, Incredible Sex, and Becoming Superhuman, in which he talks about many different things and, among them, he describes the slow-carb diet. What I liked in that diet, was the fact that I didn’t need to give up fats and fatty proteins, which for me were always the main ingredients of almost any good meal.

I have decided to give this diet a try (and started doing some walking on a relatively regular basis) and, to my surprise, I have started seeing the weight numbers on my scale going down at a steady pace of 3-4 lbs per week. I did have a lot of excess fat and water in my body so now I understand it wasn’t that surprising, but back then it looked like a miracle

Fast forward 2 years and I found myself weighing around 235 lbs (105 kg), many sizes smaller (I had to buy all new clothes), but it looked like I have reached a plateau in my weight loss. For almost 6 months my weight (and my body composition) stayed almost exactly the same. It was getting frustrating and I started looking for a way to push through the plateau with some additional measures. This was a moment when, trying to cope with increasing stress levels caused by my wife’s pregnancy and upcoming (first) baby in our family, inspired by a few people in the community publicly sharing their running progress, I have decided to try running.

Treadmill to Road to Tails

First running experiments (on a treadmill in our gym) went pretty well and I have noticed, that I like the effects those runs had on my stress levels – every time I went for a run, I had an hour to think about something (mostly my work) but it was more like a meditative state, where I would not worry about issues, but reflect on them and look for ways to solve them. I liked it a lot!

Then, some day, after a discussion with my wife, I have decided to go buy new running shoes since my old gym trainers were too tight and caused pain after any run longer than 15-20 minutes. Not sure why, we went to a Salomon Toronto store. Considering that Salomon specializes on trail running and I was looking for road shoes, this may not have been the best idea, but I’m glad we went there. After a short consultation with the staff, I have tried on a pair of Salomon Sense Pro shoes, which at that moment felt like and have actually been the most comfortable running shoes I’ve ever worn in my life. So, I bought them and, before leaving the store, I picked up a flyer for an upcoming Summer Solstice Run (a series of multiple hour-long trail runs they do at the store during a summer solstice day) and found out about a running group at the store that does weekly trail runs every Wednesday.

After coming back home, I have decided to google “trail running” to find out what is it all about and if I may be interested in those weekly runs with the Salomon Toronto group. The first few results showed a bunch of happy people running in a park on a nice packed gravel road. “That I could definitely do!”, I thought and decided to go for a trial run on Wednesday so that I’d know if I should do the Summer Solstice Run on Saturday.

So, the next Wednesday I have put on my new “smurf blue” shoes and went to the store. A group of very friendly people greeted me to the group and we went for the run. 10 minutes after the start (I was already panting pretty hard since our pace was ~50% higher than what I was used to) we reached the Edwards Gardens park and to my surprise we didn’t start running on a nice park road, but turned off the road and went into the bushes on a pretty technical single track trail, going uphill. Long story short, the only reason I survived that run was a shock at what I got myself into and a huge amount of support and encouragement from the group and especially from a Salomon ambassador Joshua Young who stayed with me through the whole run helping me with advice and pacing me through the hardest parts of that trail run. I’m not sure how long it was, but based on my observations and the time we have spent on that run, we have done around 12-15 km that day.

When I came back home that day, I looked like hell: dirty, tired, with black circles under my eyes… but when my wife asked if I want to go back the next week, I answered with no hesitation: “Hell, yes!”. This was the hardest thing (physically) I’ve done in my life and I was astonished at what my body was actually capable of.

Sadly, I didn’t get to participate in the Summer Solstice Run the next Saturday because I had a hard time walking for the next few days and was in no shape for a run.

Realizing My Love For Trail Running

Over the next 3 months, I have done a dozen runs with the Salomon Toronto running group and many more runs by myself. I would go out for a run anytime I had a chance and the only limiting factor in the amount of running I could do was my body: I was not ready for a rapid ramp-up in mileage and my body started protesting by throwing minor, but none the least painful and limiting injuries at me after each run. Yet slowly, but surely, I was improving and at some point, I have realized, that trail running has become one of a very small number of things in my life that I genuinely love doing. 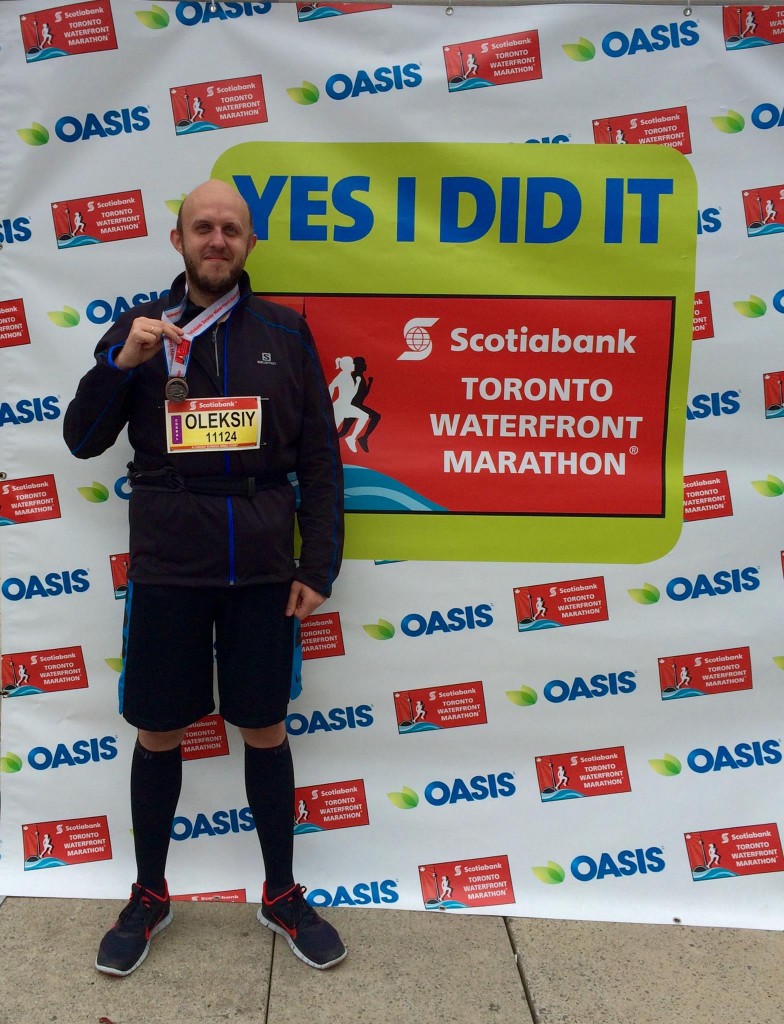 The major thing that makes trail running so very different from road or treadmill running for me, is that when I run on a trail, almost 100% of my attention is focused on the process of running itself. It is not possible to worry about something else that running, it is not possible to doze off like one could easily do on a treadmill or long flat road – on a trail, you have to think about your next step or there is a huge chance you’ll soon be flying face forward down a hill. And this is exactly what I always needed to help me cope with the stress – a way to forget about everything and focus on a simple pleasure of moving through the beautiful natural landscape. 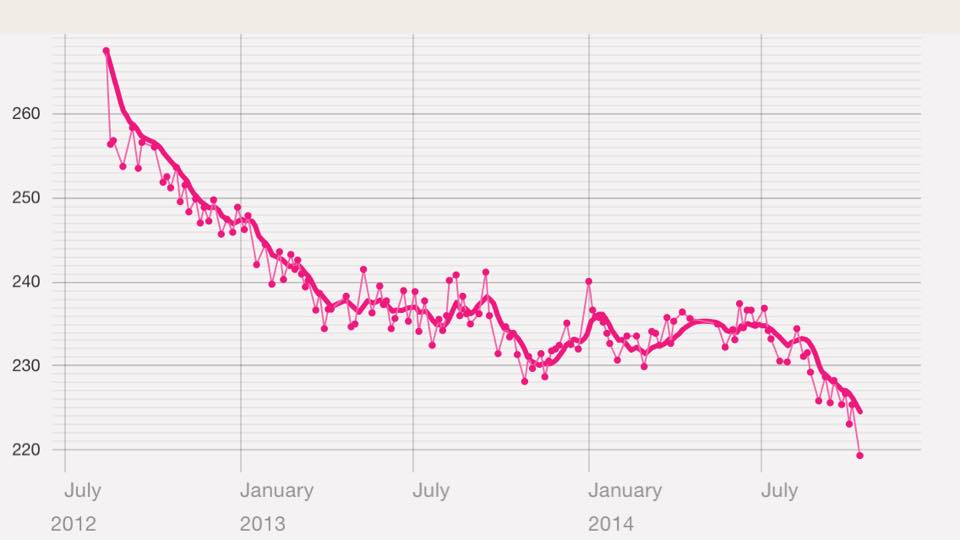 And, what is much more important, I have now become a running ops – a better, stronger and much faster version of my old self!

One thought on “Running Ops”